Nuggets I picked up from my dog, No. 4

Out In Real Life

Bought Coffee J. Dogg one of those new-age leash thingies, the ones with the spring-loaded cord coiled inside an industrial strength  plastic housing—sometimes  known as a handle. 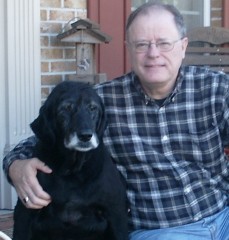 Being bits of wisdom gleaned from daily walks with my dog, Coffee. He had a soft, furry head and he never complained. He left for stars unknown in 2010.

That a simple dog’s leash could evolve into something with a handle or be associated with the legerdemain of gizmology says much, probably too much, about our civilization. The Gizmo Wind long ago carried off the hopelessly inane idea of using a length of clothesline to walk the dog. It’s the very same force that replaced the old-fangled, no-tech push-broom with a gas-powered, sonic-booming leaf blower. Or introduced to our bathrooms an electronic toothbrush that can strip paint off a tool shed but still leave a little piece of spinach between your front teeth.

With his new leash and a smart red collar I took Coffee to the vet where we were awarded the coveted metallic rabies tag without which no civilized dog is complete or legal. We were now, in the parlance of dog walking, good to go.

It wasn’t as complicated in my boyhood and doghood days in Syracuse. Like the dinosaurs, which had only recently died out, neighborhood dogs roamed the land at will. They would leave home in the morning, snoop the sniff out of a hundred hydrants, take care of their business wherever they pleased, then at dusk they would deliver their “I’m back” bark. Given a warm place to sleep, they would replay their day’s mysterious adventures in quivering dreams of whimper and woof.

From Day One, Coffee struggled mightily at the taut end of his leash. When I wanted to go one way and he another he would sit his hundred pound can down and refuse to budge while I cajoled and tugged. If a neighbor passed by, he broke into the high drama of pretending he was choking to death.

“Oh dear,” a school bus Mom said to me one morning as the coughing, hacking hound threw her a desperate glance with conniving brown eyes. “It sounds like he’s choking to death.”

“It does, doesn’t it?” I smiled, hauling in on the leash to keep the faker from sniffing a nearby foreign pant leg.

For days Coffee and I sparred over where I wanted him to go and at what speed he refused to get there. One day a sullen teenager appeared, dragging a small choking dog at the end of a leash. She hauled him roughly into an open space where scofflaws take their dogs in the dark of night to unload the groceries. I think of it as Poop Central. The sullen teen hollered at the quivering dog “Come on! Poop!”

Nothing like watching a metaphor unfold before your eyes. I identified with the sad little pup even as I gripped my plastic handle against the strainings of my own aggrieved hound. In perfect keeping with the ancient struggle between the powerful and the powerless, the dog at the end of the teenager’s leash played the only card available. It refused to be so demeaned, as if righteously yipping You may choke me but you can never make me do do doodley do do.

For it’s small rebellion the pup was dragged unceremoniously back around the corner to its house with punitive rage. Once at home, I could imagine the teenage girl exchanging that leash for a collar around her own neck as her parents screamed.”Come on! Get a scholarship to Harvard!”

Thus is the play called Life so often staged: child versus dog, parent versus child, Big Cheese Editor versus Lowly Reporter, The Spouse Who Holds the Hoop versus The Spouse Who Jumps Through It. Always, just the two possibilities. You either hold the leash or you struggle against it.

But is there no gray between black and white? No trust between Mr. Outside and Mr. Inside? No warmth between The North Pole and South Pole? Does one always have to be colder than the other? Without the leash, my exterior persona argued, I couldn’t trust Coffee J. Dogg not to run off, not to make a mess in somebody’s yard, not to bite someone and send me to the poorhouse. Yes, but an enchanting interior voice countered, the leash means you don’t trust him to be a real dog, a true dog, a man’s best friend dog.

I was fortunate that Coffee came to us with three or four commands pre-programmed during his life with our son, Brendan. Considering this the next day, Coffee and I went out without the leash. When he charged ahead, I shouted “Stay!” Doggone if he didn’t sit down and stay. Just as rules make it safe for everyone, obedience, I could see with surprise, does have its place.

The treaty we agreed to was this: Coffee wears his collar, I carry the leash, though unattached. If we meet a neighbor or a dog who does not know him, we hook up. When the action passes, we unhook. When a command is ignored, we hook up and stay hooked up for the rest of the walk. This is how football strikes are resolved and wars ended. It’s pretty much why we have a United Nations.

Thus have dog and master become a team. Coffee putters on happily ahead, smelling whatever he wants, but never goes out of my sight. He stays when he reaches a corner and drops the odd bit of garbage when I tell him to “Leave it!” He sits passively with groups of kids and allows them to pet him, then follows after me when it’s time to move on.

Now, whenever he decides to sit on a neighbor’s lawn to view the world at leisure from a different angle, I no longer strain heart and muscle trying to move him. I let him sit. I use such moments to muse about the meaning of life, the meaning of death and the letter I’m going to write nominating myself for a MacArthur genius grant.

I see myself chilling out before his very snout. No comment yet from the dog, but I believe his inner wise guy has to be impressed that you can still be a real dog and get in plenty of interesting sniffs without acting like the Hound of the Baskervilles. The possibilities for the two of us now seem endless. I’m waiting with great curiosity to see how it all plays out in real life.

Note: For more about Coffee J. Dogg and the origins of these essays, click on the menu bar “Nuggets I Picked Up From My Dog”

©Patrick A. McGuire and A Hint of Light 2013, all rights reserved.

Like Loading...
This entry was posted in Dogs I Have Known, The human comedy and tagged dogs, humor, Nuggets. Bookmark the permalink.

3 Responses to Nuggets I picked up from my dog, No. 4

This site uses Akismet to reduce spam. Learn how your comment data is processed.